Addressing these questions is the main task of the ontology of scientific change.

In the scientonomic context, this question was first formulated by Hakob Barseghyan in 2015. The question is currently accepted as a legitimate topic for discussion by Scientonomy community. Theory Assessment Outcomes (Patton-Overgaard-Barseghyan-2017), Epistemic Elements - Questions and Theories (Barseghyan-2018) and Epistemic Agents - Communities (Barseghyan-2015) are currently accepted by Scientonomy community as the best available answers to the question. They are formulated as: "The possible outcomes of theory assessment are satisfied, not satisfied, and inconclusive.", "The two basic classes of elements that can undergo scientific change are questions and theories, where each theory is an attempt to answer a certain question, and method is a subtype of normative theory." and "Only a community can be the bearer of a scientific mosaic.".

In the early twentieth century, logical positivists formulated an ontology of scientific change. While they individually held varying views, we can summarize their ontology by generalizing from the overlap between authors. The positivists generally supposed that there was a single scientific method that did not change through history or across disciplines so that the only epistemic elements capable of change in their ontology were scientific theories.1pp.145-162 A similar ontology was championed by many non-positivist authors, including Karl Popper.2pp. 62-63

Despite its inherent vagueness, Kuhn’s Structure of Scientific Revolutions can be interpreted as suggesting a number of new ontological elements, including methods, values, questions, standards, and problems. It is not quite clear whether these are all meant to be independent epistemic elements in their own right. Kuhn also famously used a whole range of words denoting epistemic stances, such as embraced, universally received, acknowledged, and committed among many others.3pp. 10-13 It remains to be seen whether he meant them as synonyms, or whether he ascribed different meanings to at least some of them.4p. 30

Imre Lakatos generated a holistic account of scientific change slightly regressive to previous ontologies. Lakatos kept Kuhn’s view of the fluidity of paradigms within scientific communities however, with two small modifications. Firstly, Lakatos saw paradigms as research programmes, of which many simultaneously existed, and secondly Lakatos believed they followed a more rational model of change, i.e. modifications were judged as regressive or progressive based on certain conditions.5pp. 31-34 With regards to regression, Paul Feyerabend criticized Lakatos for once again suggesting that theories can only be pursued. The whole system Lakatos built was a high functioning competition between research programmes.6 As such, per Lakatos, theories could never really be accepted, and thus they carried the potential to threaten science with a potentially infinite number of theories all of which are rational to pursue.

Finally, Larry Laudan paints the closest picture to the ontology scientonomy posits today. Laudan recognized values, theories, and methodologies as epistemic elements with relations to scientists as epistemic agents. Theories could be accepted under his view and methodologies could be employed. Each epistemic element under Laudan’s reticulated model could be modified. Laudan did not recognize the potential of theories to be used but not accepted but he did recognize pursued and accepted theories in contrast to Lakatos and the logical positivists.7

In Barseghyan's The Laws of Scientific Change, the question of the ontology of scientific change is discussed without being explicitly formulated. While the question has been accepted and discussed at length by the scientonomy community ever since its inception, it wasn't until the early 2017 when the question was openly formulated and documented.

In 2018, Rawleigh suggested that questions are to be accepted as a separate epistemic element; the suggestion became accepted later that year and the ontology was modified to include theories, methods, and questions.9

This ontology is implicit in the second law of scientific change as formulated by Patton, Overgaard, and Barseghyan in 2017.

Epistemic Elements - Questions and Theories (Barseghyan-2018) states: "The two basic classes of elements that can undergo scientific change are questions and theories, where each theory is an attempt to answer a certain question, and method is a subtype of normative theory." 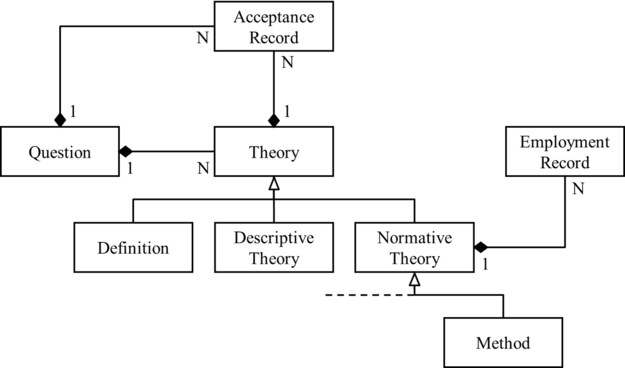 In this ontology of epistemic elements, theories are conceived of as attempts to answer certain questions. Theories can be of three types – descriptive, normative, or definitions. Method is understood as a subtype of normative theory. The ontology also posits that both questions and theories of all types – including methods – can be accepted. Finally, the ontology suggests that normative theories of all types can be employed.

It has the following sub-topic(s):