Accept new definitions for theory, normative theory, and descriptive theory. Also, modify the definition of methodology to reflect these changes.

Currently, theory is defined as "a set of propositions that attempts to describe something". This definition implies that all theories are necessarily descriptive and excludes the possibility of normative theories (such as those of ethics or methodology). This makes it impossible to even formulate the question about the status of normative theories in the mosaic, let alone have a meaningful discussion on their status. Thus, we need a new taxonomy for theory, descriptive theory, and normative theory so that we can pose a meaningful question on the status of normative propositions in the mosaic.

Define theory as "a set of propositions" with normative and descriptive theories as subcategories of theory. Also accept a new definition of methodology to reflect the new taxonomy: 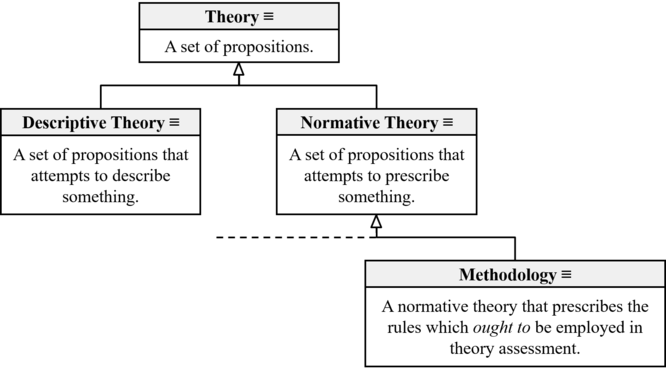 The modification was accepted on 15 February 2017. The community agreed that this is "an important addition to theoretical scientonomy".c1 It was agreed that since "the paradox of normative propositions has been solved, a revised set of definitions was needed".c2 It was emphasized that if we're going to have any sort of conversation on the status of normative propositions in the mosaic, "then we need to start from a definition".c3