Accept a new taxonomy for group and its two sub-types - accidental group, and community.

Although it is accept in scientonomy that communities are bearers of mosaics, the notion of community currently lacks a proper definition. To remedy the situation, I suggest differentiating between accidental group and community as two different types of group based on the respective absence and presence of a collective intentionality. This differentiation provides a foundation for the taxonomy of social agents of scientific change.

Accept the following taxonomy for group and its two sub-types: 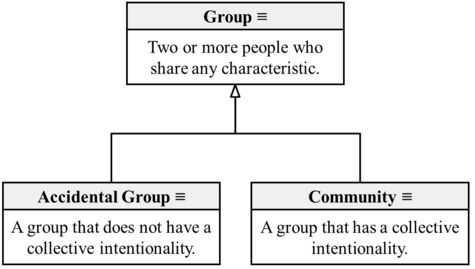 The modification was accepted on 2 February 2018. A consensus has emerged after a long discussion that the distinction and the respective definitions should be accepted. It was noted that "these formulations tend to be the starting point for so many of our discussions"c1 and that "despite all disagreements that this taxonomy causes, it is actually accepted by the community".c2 Yet, it was also indicated that whereas the definition of group as "two or more people that share a characteristic" is the best we have at the moment, it may be potentially necessary to pursue the idea of redefining it as "one or more people..." to allow for one-scientist communities.c3 Finally, while a question was raised whether there is any "value in defining accidental groups as something separate from groups",c4 it was eventually agreed that it is important to draw "a clear distinction between the two kinds of groups as accidental groups and communities".c5