What is the nature of theory appraisal? Does actual theory assessment concern an individual theory taken in isolation from other theories?

Theory appraisal refers to how we assess a theory to determine whether to accept it. From ancient times up until the mid-twentieth century, it was widely supposed that theories were appraised in isolation from one another; a position known as absolute appraisal. Once fallibilism became widely accepted, it was suggested instead that theory appraisal is a comparative matter, in which the relative merits of competing theories were assessed. Contextual appraisal contends that a theory is assessed only in relation to the entire mosaic of accepted theories and employed methods. For the historian, several elements must be considered in order to avoid committing anachronisms.

In the scientonomic context, this question was first formulated by Hakob Barseghyan in 2015. The question is currently accepted as a legitimate topic for discussion by Scientonomy community. Contextual Appraisal theorem (Barseghyan-2015) is currently accepted by Scientonomy community as the best available answer to the question. It is formulated as: "Theory assessment is an assessment of a proposed modification of the mosaic by the method employed at the time."

Concepts predating the current appreciation of contextual appraisal include epistemological concerns about the absolute appraisal of individual theories based on their available data. Early rationalist and empiricist philosophers believed in what has been called the justificationist interpretation of absolute appraisal, which states that there can be decisive proofs and refutations of individual theories.1

Later, probabilist interpretations were proposed stating that one cannot decisively prove a theory, but merely objectively measure its probability relative to the available evidence. This probabilistic tradition has been common amongst philosophers of science at Cambridge, and by the logical positivist tradition in Vienna. Laudan has a good discussion on probabilism in theory appraisal.2 Both interpretations of absolute appraisal share the opinion that theory assessment concerns an individual theory taken in isolation from other theories. For instance, the logical positivists believed that scientific theories were created by constructing logical structures for empirical data.

In contrast, the comparative interpretation contends that theory assessment does not concern individual theories considered in isolation. The shift towards the comparative interpretations of theory appraisal began with the acceptance of fallibilism in epistemology. Fallibilism is the idea that no empirical belief can ever be rationally supported or justified in a conclusive way. Determining which theory is the best available requires that extant competitors be appraised by their relative merit through a comparative appraisal process.3pp. 111-140 4pp. 211-215 5pp. 10-12

Among the first philosophers of science to appreciate comparative appraisal was Karl Popper. Popper maintained that theories are tested by attempts to refute them. In his conception of theory appraisal, a proposed theory was judged against an accepted theory on the basis of a crucial falsifying experiment. In such an experiment, the predictions of the old and new theory contradict each other. As a result, one of the theories must be falsified in this experiment. The unfalsified theory will become the new accepted theory.6

Thomas Kuhn saw theories as forming interrelated groups united under the banner of what he called a paradigm. Paradigms were defined as "coherent traditions of scientific research".7p. 10 Appraisal was thus contextual. Scientific development alternated between periods of normal science and scientific revolutions. In normal science the paradigm guides the explanation of a widening range of phenomena. The accumulation of anomalies which resist explanation can result in a scientific revolution, in which one paradigm is replaced with another. Kuhn argued that paradigms were "incommensurable", and initially described the conversion from one to another in ways that made paradigm choice seem non-rational.7pp. 111-135 He later suggested that paradigm choice was comparative and involved reasoned judgment guided by epistemic values that had remained fixed over history.8

Like Kuhn, Imre Lakatos saw theories as grouped into interrelated sets called research programs and saw their assessment as contextual.5pp. 47-67 The theories comprising a research program were not accorded equal status. Its hard core consisted of the central tenets of the research program, and its protective belt of subsidiary theories or assumptions. Theories constituting the protective belt were modified or replaced as needed to account for new experimental findings with the goal of protecting the hard core of from falsification. He recognized that theories always face "an ocean of anomalies" but saw this as only becoming significant when a new rival theory makes a successful novel prediction.9pp. 111, 126-128

The later Larry Laudan agreed with the concept of comparative appraisal.10 In his reticulated model of science, theory choice is determined by the methods employed at the time. The methods in turn are shaped by the accepted theories. Laudan's reticulated model is an important precursor to modern scientonomy.

However, the traditional comparative procedure of theory appraisal only accounts for two competing theories, some method of assessment, and some relative evidence. What the traditional version of comparativism does not take into account is that all theory assessment takes place within a specific historical context.11pp. 186-196

In Scientonomy, the accepted answer to the question is Contextual Appraisal theorem (Barseghyan-2015).

Contextual Appraisal theorem (Barseghyan-2015) states: "Theory assessment is an assessment of a proposed modification of the mosaic by the method employed at the time."

Theory assessment is an assessment of a proposed modification of the scientific mosaic by the method employed at the time. By the first law, a theory already in the mosaic is no longer appraised. By the second law, it is only assessed when it first enters the mosaic.11pp. 185-196 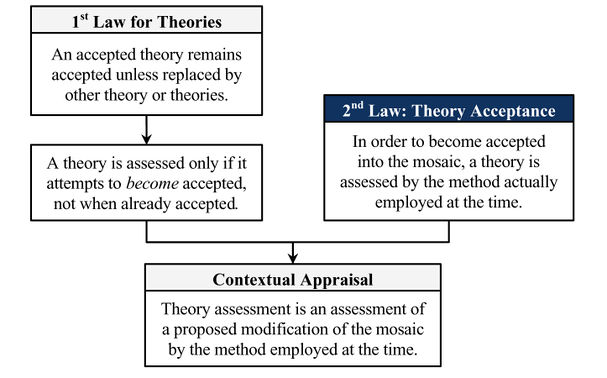 This question is a subquestion of Mechanism of Theory Acceptance.