Scientific Underdeterminism theorem was formulated by Hakob Barseghyan in 2015.1 It is currently accepted by Scientonomy community as the best available answer to the question.

As noted in the page Determinism vs. Underdeterminism in Scientific Change, it has been traditionally assumed by many that scientific change is deterministic. However, there have been many other notable philosophers (and some sociologists) who can be broadly said to have supported the thesis of scientific underdeterminism, such as Descartes, Kuhn, Duhem, Quine, Lakatos, Feyerabend, Laudan, and most sociologists of scientific knowledge (Bloor, Latour, etc.).1p. 1962 Descartes’ demon was not framed in the context of scientific change, but its main point was to illustrate that our senses underdetermine the true nature of things. The foundation of the modern thesis of scientific underdeterminism lies in the work of Duhem and Quine, who had similar but distinct views on the testing of hypotheses. Duhem held that “An Experiment in Physics Can Never Condemn an Isolated Hypothesis but Only a Whole Theoretical Group”3p. 1834p. 98, whereas Quine extended this claim to our entire body of knowledge – this is Quine’s so called “web of belief”.4p. 110 Quine states that “total science is like a field of force whose boundary conditions are experience. […] But the total field is so underdetermined by its boundary conditions, experience, that there is much latitude of choice as to what statements to re-evaluate in the light of any single contrary experience.”5pp. 42-43

The Duhem-Quine thesis on its own does not directly support the Scientific Underdetermination theorem – it could be that there is no rational way to choose what to re-evaluate in light of a contrary experience, but that scientists nonetheless follow certain rules. Philosophers like Feyerabend, Lakatos, Kuhn and adherents to the SSK view would contend that there are extra-scientific factors that affect the choice of what to re-evaluate, and that this in turn causes underdeterminism of scientific change. Feyerabend and Lakatos believed that the difference between successful and unsuccessful theories may lie not in the factual content, but in the skills of adherents in advocating for their chosen theory.2 SSKers would suggest a whole host of potential factors in how we decide between theories when experiencing conflicting evidence, including but not limited to “career interests, political affiliations, intellectual allegiances, gender biases,”2 etc. All this is to say that the identification of these factors indicates that these thinkers would acknowledge that there can be things outside the scientific mosaic that affect its evolution, and that the evolution is not predictable based on scientific considerations alone – that is, they would accept the thesis of scientific underdeterminism.

Scientific Underdeterminism theorem (Barseghyan-2015) is an attempt to answer the following question: Is the process of scientific change a strictly deterministic process? Will two unconnected communities experience a similar historical series of changes in their individual mosaics?

See Determinism vs. Underdeterminism in Scientific Change for more details.

Scientific underdetermination is the thesis that the process of scientific change is not deterministic, and science could have evolved differently than it did. Hypothetically, two scientific communities developing separately could experience an entirely different sequence of successive states of their respective scientific mosaics. Even without the TSC, the implausibility of scientific determinism can be seen by considering the process of theory construction, which is outside the present scope of the TSC. Theory construction requires creative imagination, and the formulation of a given theory is therefore not inevitable. Still, underdetermination can also be inferred as a theorem from the axioms of the TSC.1pp. 196-198 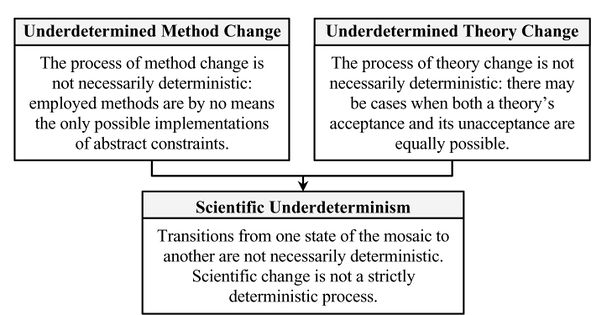 These two theses combine to form the SUT, since changes in theories and methods are all the transitions that occur in the scientific mosaic, and we have seen that the underdetermination of theory and method change follow deductively from the 2nd law, the 3rd law and the possibility of inconclusive theory assessment.