An attempt to answer the question of Scientonomic Workflow which states "Scientonomic knowledge is best advanced by: 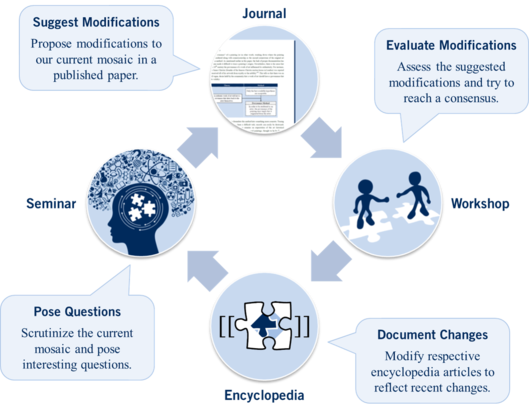 Scientonomic Workflow was formulated by Nicholas Overgaard, Hakob Barseghyan, Gregory Rupik and Paul Patton in 2016.1 It is currently accepted by Scientonomy community as the best available theory on the subject.

Scientonomic Workflow (Barseghyan et al.-2016) is an attempt to answer the following question: How should changes in the accepted body of scientonomic knowledge be introduced? What are the steps and procedures of the scientonomic workflow?

The key stages of the workflow are:

The primary role of this encyclopedia in the scientonomic workflow is to document the current state of scientonomic knowledge, trace all suggested modifications, and list open questions.

Here is an outline of the main stages of the scientonomic workflow:

This workflow gives researchers a simple way of knowing where the community stands on different topics, i.e. what theories it currently accepts, what open questions it tries to answer, what modifications have been proposed and how they have been assessed. It ensures that our communal knowledge is advanced in a piecemeal and transparent fashion:

The workflow is scalable, as it can - in principle - be implemented in other fields of digital humanities and beyond.