Are there any methods which are immune to change?

The question of whether or not methods are static or dynamic is a fundamental question in the scientonomic community. A method is said to be static when it is immune to change, and dynamic when it is not.

In the scientonomic context, this question was first formulated by Hakob Barseghyan in 2015. The question is currently accepted as a legitimate topic for discussion by Scientonomy community. Dynamic Substantive Methods theorem (Barseghyan-2015) and Static Procedural Methods theorem (Barseghyan-2015) are currently accepted by Scientonomy community as the best available answers to the question. They are formulated as: "All substantive methods are necessarily dynamic." and "All procedural methods are necessarily static.".

The question as to whether the requirements theories should satisfy as well as the assessment criteria employed to evaluate theories are transhistorical (i.e. remain fixed over time) or, on the contrary, change on a par with theories has been addressed by several renowned philosophers of science. On the one hand, some of them subscribed to the thesis that scientific methods are static and immune to change. In this first category we find the logical positivists, as well as Karl Popper, Imre Lakatos, the early Larry Laudan, John Worrall and Mario Bunge. This group of thinkers generally acknowledged the existence of an invariant core of fixed, abstract and general principles for theory appraisal; without those fixed standards epistemic relativism would be inescapable. On the other hand, some subscribed to the thesis that no methods are immune to change. In this second category we find others like Thomas Kuhn, Paul Feyerabend and the later Larry Laudan. Methodology was also one of the subjects discussed in the correspondence between Lakatos and Feyerabend1 who stood respectively for and against the existence of a fixed core of rules. Since the 60's and 70's it is generally acknowledged that those requirements and assessment criteria, at least to some extent, are not immune to change, and that theories, at least to some extent, can shape methods. Influential in this regard were Kuhn's theory of scientific revolutions, presented in his classic book The Structure of Scientific Revolutions2 according to which in those revolutionary episodes not only theories but also methods - collectively called "paradigms" - change, this process is simultaneous or synchronous and Feyerabend's epistemic anarchism thesis, put forward in his book Against Method,3 according to which not only they do change and therefore there are no such fixed standards, but "anything goes". In their influential books, Kuhn and Lakatos provided support for the dynamic methods thesis, by supporting it with examples from the history of science.

Of particular importance for this discussion was the debate between John Worrall and Larry Laudan,456 that took place in the late 80’s. The debate was initiated by Worrall’s review of Laudan’s book Science and Values,7 in which the latter presented his reticulated model of scientific change, in which the methodological, theoretical and axiological levels are intertwined. In the ensuing debate Worrall took the side of statism and Laudan that of dynamism. While both intended to offer a rational account of scientific change and to forestall the threat of epistemic relativism, the debate hinged on their respective conceptions of methodology, Laudan defending a broader one and Worrall a narrower one. A preliminary distinction between these conceptions of a narrower and broader methodology was provided by Worrall.4 Also, throughout the Worrall-Laudan debate no sharp distinction is provided between the procedural or formal and substantive methods, but at the end of it both contenders agree that the latter ones, those shaped by our accepted ontology and theories, do change over time and are shaped by those pressupositions, even if the question as to whether there are purely procedural methods is left unanswered.

Barseghyan8 picked up on the Worrall-Laudan debate and further clarified things, firstly by providing a more precise distinction, already hinted at by Worrall,4 between methods as the implicit rules employed in theory assessment on the one hand, and methodology, or the explicitly formulated rules, on the other. And secondly, by breaking the issue debated into two different questions, one empirical and pertaining to HSC (“are there any methods that have not changed over time?”) and another theoretical and pertaining to TSC (“are there any unchangeable or immune methods in principle?”). He also provided a more precise distinction of substantive and procedural methods, by asking what sorts of presuppositions they respectively make. In this order of ideas, substantive methods are those which presuppose at least one contingent proposition, while procedural methods are those which don’t presuppose any, but only necessary truths. An example of the former is the double-blind trial method and an example of the latter is the deductive acceptance method. However, specification and implementation of procedural methods depend on both the type of logical inference rules employed, as well as on the applicability of these rules to different types of propositions (true or quasi-true). In the empirical sciences, in which propositions are fallible and contingent, the thesis of fallibilism is assumed and paraconsistent logic is applied. Barseghyan suggests that the question as to whether methods change or not amounts to asking whether methods (both procedural and substantial) can be rejected or replaced, or if there are irreplaceable methods and concludes that TSC provides an answer to this question, expressed by the Dynamic Methods Theorem and the Static Procedural Methods Theorem, whereby the conclusion is reached that all substantive methods are necessarily dynamic, while all procedural methods are necessarily static. 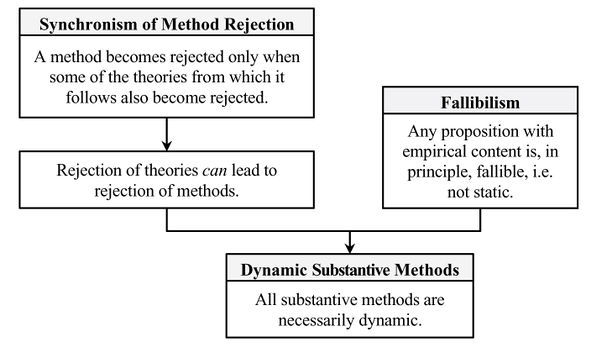 This theorem explains why all substantive methods are necessarily dynamic. By definition all substantive methods contain at least one contingent proposition so they cannot be immune to change. Thus, from a conjunction of: 1. fallibilism, namely the assumption that all propositions with empirical content are by definition both contingent and therefore fallible, 2. the premise that the rejection of theories can lead to the rejection of methods, and 3. the Synchronism of Method Rejection Theorem (derived in turn from the Method Rejection Theorem and the Third Law), it follows that all substantive methods are necessarily dynamic.

One example is the transition from the controlled trial method to the blind trial method and then to the double blind trial method. Blind trials were introduced as an implementation of the more abstract method that required to account for the placebo effect on patients when testing drugs. Once the placebo effect became known, the method changed. And after, when it became known that the experimenter's bias also had a role on patients when testing drugs, the method changed once more, from blind to double-blind.

Another example is the transition from the Aristotelian-Medieval Method to the Hypothetico-Deductive Method. While in the former it was assumed that there was an essential difference between natural and artificial, and that therefore the results of experiments, being artificial, were not to be trusted when trying to grasp the essence of things, in both the Cartesian and Newtonian worldviews such a distinction was not assumed and therefore experiments could be as reliable as observations when trying to understand the world. Once the theories changed (from the natural/artifical distinction to no such distinction) the methods changed too (from no-experiments to the experimental method). 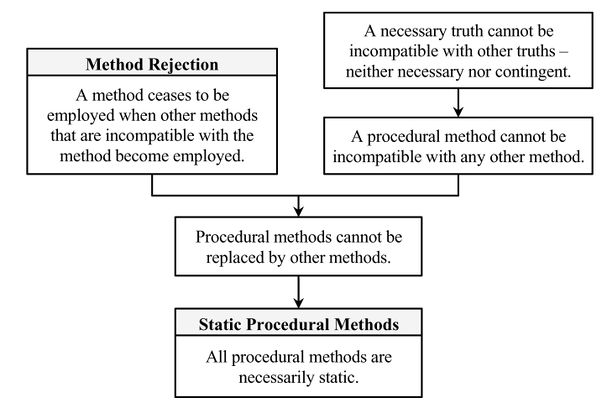 This question is a subquestion of Mechanism of Method Rejection.