This is an answer to the question Mechanism of Method Employment that states "A method becomes employed only when it is deducible from other employed methods and accepted theories of the time."

This version of The Third Law was formulated by Hakob Barseghyan in 2015.1 It is also known as the law of method employment.

The basic idea of the third law is not new. A number of philosophers have suggested that our beliefs about the world shape how we engage with the world. Different versions of this idea can be found in the works of Thomas Kuhn, Paul Feyerabend, Dudley Shapere, Larry Laudan, and Ernan McMullin.

Most noteworthy is Larry Laudan’s account of changes in drug trial methods. In his Science and Values, Laudan argued that the discovery of previously unaccounted effects resulted in the formulation of new methods of drug testing.2pp. 38-39 However, while Laudan’s account hints at aspects of the third law, it ultimately conflates methods and methodologies.1pp. 130-131

Ernan McMullin’s accounts of historical methods offer another example of a prototype of the third law. McMullin showed how the hypothetico-deductive method came to replace the Aristotelian Medieval method in the 18th century. In his account, McMullin shows that the employment of the hypothetico-deductivism was a result of accepting that the world is more complex than it appears in our observations.3pp. 32-34 These accounts demonstrate how our accepted theories impact our criteria of theory assessment.

There have been many other attempts at explicating the way in which methods change, such as the reconstructions of Plato’s method performed by David Lindberg, or the proposal of synchronous change in paradigm shifts by Thomas Kuhn.

Nevertheless, according to Barseghyan, "what we have had so far is a picture from a bird’s eye perspective. What we lack is the knowledge of the actual mechanism: how exactly can accepted theories shape employed methods?".1pp. 133

Barseghyan's formulation of the third law was the first attempt to address the problem of method employment in the scientonomic context.

Here is the complete acceptance record of The Third Law (Barseghyan-2015):

These are all the modifications where the rejection of the theory has been suggested:

The Third Law (Barseghyan-2015) is an attempt to answer the following question: How do methods become employed by a community in theory assessment?

According to this formulation, a method becomes employed when:

In a nutshell, this suggests that accepted theories shape the set of implicit criteria employed in theory assessment.

The third law does not stipulate how methods should go about specifying any new abstract requirement. The third law functions as a descriptive account of how methods change, and is not responsible for describing how methods ought to change. As such, it is an effective means of explicating the requirements of other employed methods. The Aristotelian-Medieval method is one such example of its utility.

In Barseghyan’s explication of the Aristotelian-Medieval method, he illustrates how Aristotelian natural philosophy impacted the method of the time. Most notable is the acceptance of teleology – a theory which states that every thing has a nature it seeks to fulfill (e.g. an acorn’s nature is to become an oak tree). It stood to reason that the nature of a thing can only be intuitively grasped by an experienced person. This fundamental belief generated a method which specifies these requirements known as the Aristotelian-Medieval method, and is an illustration of how employed methods are deductive consequences of the accepted theories of the time.

The third law has also proven useful in explicating such requirements as Confirmed Novel Predictions (CNP). According to the hypothetico-deductive method, a theory which challenges our accepted ontology must provide CNP in order to become accepted. However, the history of CNP has been a point of confusion for some time. By the Third Law, one can show that the requirement of CNP has not always been expected of new theories. When Newton published his Principia, CNP were not a requirement of his professed method, yet they were still provided. On the other hand, Clark’s law of diminishing returns had no such predictions. This is because Newton’s proposal of unobservable entities, such as gravity and absolute space, challenged the accepted ontology of the time, while Clark’s simply accounted for the data already available. Thus, in utilizing the Third Law, one can discover both when certain criteria become an implicit rule and under what conditions they are necessary.

The gist of the theory can be illustrated by the following examples.

"How exactly can changes in accepted theories trigger changes in employed methods? What is the precise mechanism of method change? How do methods become employed?".1pp. 136

Barseghyan presents the example of testing a new drug for alleviating depression to as an example of the third law and in answer to these questions. In summary, the evolution of the drug trial methods is an example of the third law in action. For example, the discovery of the placebo effect in drug testing demonstrates that fake treatment can cause improvement in patient symptoms. As a result of its discovery the abstract requirement of “when assessing a drug’s efficacy, the possible placebo effect must be taken into account” was generated. This abstract requirement is, by definition, an accepted theory which stipulates that, if ignored, substantial doubt would be cast on any trial. As a result of this new theory, the Single-Blind Trial method was devised. The currently employed method in drug testing is the Double-Blind Trial, a method which specifies all of the abstract requirements of its predecessors. It is an apt illustration of how new methods are generated through the acceptance of new theories, as well as how new methods employ the abstract requirements of their predecessors.1pp. 132-152

Specifically, Barseghyan begins with the question "How can we ensure that the improvement was due to the drug itself and not due to other unaccounted factors?" The question is answered by the implementation of a controlled trial, wherein "we organize a trial with two groups of patients with the same condition – the active group and the control group. Only the patients in the active group receive the drug".1pp. 134

What we have here is a transition from one method to another triggered by a new piece of knowledge about the world. The initial method was something along the lines of hypothetico-deductivism: we had a hypothesis “the drug is effective in alleviating depression” and we wanted to confirm it experimentally. Once we learnt that the alleviation may be due to other factors, our initial method was modified to require that a drug’s efficacy must be tested in a controlled trial.1pp. 134

Another transition in method occurred when upon the discovery of the placebo effect, or the fact "that the improvement in patients’ condition can be due to the patients’ belief that the treatment will improve their condition"1pp. 135. Now,

Once again, Barseghyan writes, "this is an instance of a method change brought about by a change in accepted theories".1pp. 135

But why are we forced to introduce this new requirement to our method of drug testing? Well, because this new requirement follows deductively from two elements of the mosaic – from our knowledge that the results of testing a hypothesis about a drug’s efficacy may be voided by the placebo effect and from a more fundamental requirement that we must accept only the best available hypotheses.1pp. 137

A final change in method occurred when experimenter's bias was discovered:

The researchers that are in contact with patients can give patients conscious or unconscious hints as to which group is which. It is possible that the positive effect of the drug established in a blind trial was due to the fact that the patients in the placebo group knew that they were given a placebo. The method of drug testing was modified yet again to reflect this newly discovered phenomenon. The contemporary approach is to perform a double-blind trial where neither patients nor researchers know which group is which.1pp. 135-6 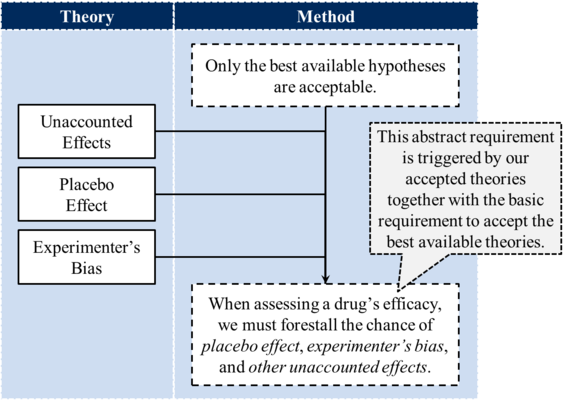