An attempt to answer the question of Determinism vs. Underdeterminism in Scientific Change which states "The process of theory change is not necessarily deterministic: there may be cases when both a theory's acceptance and its unacceptance are equally possible."

Underdetermined Theory Change theorum was formulated by Hakob Barseghyan in 2015.1 It is currently accepted by Scientonomy community as the best available theory on the subject.

Underdetermined Theory Change theorem (Barseghyan-2015) is an attempt to answer the following question: Is the process of scientific change a strictly deterministic process? Will two unconnected communities experience a similar historical series of changes in their individual mosaics?

See Determinism vs. Underdeterminism in Scientific Change for more details.

The process of theory assessment under the TSC is underdetermined for two reasons. First, only theories that are constructed are available for assessment. Whether or not a theory is ever constructed is, at least partly a matter of creativity, and is therefore outside the scope of the TSC. Second, it is at least theoretically possible that a process of theory assessment will be inconclusive. This might be because the requirements of the method employed at the time might be vague (e.g. Aristotelian requirements of "intuition schooled by experience").1p. 199-200 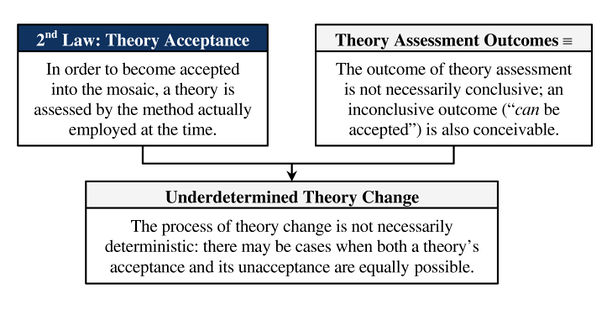