This is an answer to the question Mechanism of Mosaic Split that states "When two mutually incompatible theories satisfy the requirements of the current method, the mosaic necessarily splits in two."

Necessary Mosaic Split theorem was formulated by Hakob Barseghyan in 2015.1 It is currently accepted by Scientonomy community as the best available answer to the question.

Like the broader topic of the Mechanism of Mosaic Split the matter of possible mosaic split has classically been regarded as a case of divergent belief systems in communities that arises necessarily from a set of circumstances. Consequently the most directly relevant literature comes from the positivist era, though some relevant work was also done in the post-positivist era.

The most direct early source suggesting that there are circumstances in which communities necessarily obtain different beliefs about scientific subjects is the work of Karl Popper, whose system of conjectures and refutations suggests that progress in science is obtained by challenging our currently accepted views by trying to refute them.2p. 68 It follows that if there are situations in which a community has two theories that are both resistant to refutation then both should be accepted. This model - whereby there is a definite algorithmically determined method for theory assessment - was dominant among positivist philosophers and would prevail until the historical turn, when a model more closely reminiscent of the possible mosaic split theorem emerged.3p. 5

Necessary mosaic split is a form of mosaic split that must happen if it is ever the case that two incompatible theories both become accepted under the employed method of the time. Since the theories are incompatible, under the zeroth law, they cannot be accepted into the same mosaic, and a mosaic split must then occur, as a matter of logical necessity.1pp. 204-207 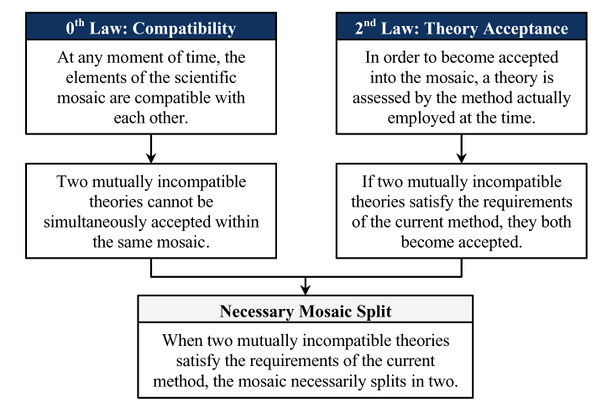 As shown in the figure above, the necessary mosaic split theorem follows as a deductive consequence of the second law and the zeroth law. Per the zeroth law, two incompatible elements cannot simultaneously remain in a mosaic, and per the second law any theory that satisfies the method of the time (and the assessment of the theory by the method is not inconclusive) is accepted into the mosaic. This creates the apparently contradictory situation where either of the two theories A) must be accepted because it satisfies the employed method and B) must not be accepted because it in not compatible with another accepted theory.

The necessary mosaic split theorem is thus required to escape the contradiction entailed by the acceptance of two or more incompatible theories. In a situation where this sort of contradiction obtains the mosaic is split and distinct communities are formed each of which bears its own mosaic, and each mosaic will include exactly one of the theories being assessed. By the third law, each mosaic will also have a distinct method that precludes the acceptance of the other contender theory.

Two examples are helpful for demonstrating mosaic split, one formal example and one historical example. Suppose we have some community C' with mosaic M' and that this community assesses two theories, T1 and T2, both of which satisfy M'. Let us further suppose that T1 and T2 both describe the same object and are incompatible with one another. According to the second law both T1 and T2 will be accepted because they both satisfy M', but both cannot simultaneously be accepted by C' due to the zeroth law. The necessary mosaic split theorem says that the result will be a new community C1 which accepts T1 and M1, which precludes their accepting T2. Simultaneously a new community C2 will emerge which accepts T2 and the resulting theory M2, which precludes their accepting T1.