An attempt to answer the question of Mechanism of Theory Rejection which states "A theory becomes rejected only when other theories that are incompatible with the theory become accepted."

Theory Rejection theorem was formulated by Hakob Barseghyan in 2015.1 It is currently accepted by Scientonomy community as the best available theory on the subject.

Initially, the theory rejection theorem was accepted as deducible from the conjunction of the first law for theories and Harder's zeroth law. 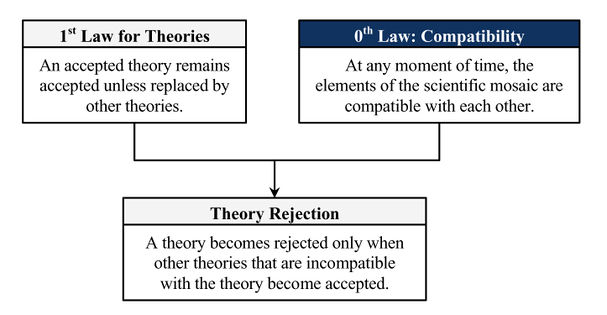 Theory Rejection theorem (Barseghyan-2015) is an attempt to answer the following question: How do theories become rejected? What is the mechanism of theory rejection?

According to the theory rejection theorem, a theory becomes rejected only when other theories that are incompatible with the theory become accepted. By the first law for theories, an accepted theory remains accepted until it is replaced by other theories. By the compatibility corollary, the elements of the scientific mosaic are compatible with each other at any moment of time. It follows, therefore, that a theory can only become rejected when it is replaced by an incompatible theory or theories.1pp. 167-172 2pp. 72-74